Traveling Alone: Trusting Others and Letting Go of Fear

I first left the country ten years ago. At the time, I was twelve years old and completely unaware of the impact that trip would have on the rest of my life. I visited Guatemala City on a service trip. We stayed in Zone 18, which at the time was ridden with gang and drug violence. The poverty was unlike anything I had ever seen in my life. The houses were tin shacks stacked on top of each other. It was not uncommon to see policemen walking the streets with bullet proof vests and giant machine guns. I was unprepared for the reality of what I saw—at the time, the most important things in my life were playing soccer and my brand new, pink iPod mini.
As we drove through the slums, I expected to see sad faces and starving children. Though life in this area was extremely difficult, I have never seen more smiles. I was included in the soccer games, which were played on a gravel pitch with no shoes and a deflated, torn ball. I came to “help” the community, but I ended up growing much more myself. I realized after returning that material comforts, beyond those necessary for survival, were not essential for happiness, and that the value gained from travel can be just as powerful if you share your experience once you return.
I started traveling on my own once I got to college, and in 2014, I spent the summer in the Republic of Kiribati, a tiny island nation in the Pacific. I was reporting on the challenges the island nation and its 100,000 inhabitants were facing due to rising sea levels. I landed on the island’s single airstrip after a four day, 14,000 mile journey across the Pacific, and was greeted with a handmade flower crown and huge hugs from my host family. We took a canoe across the lagoon to Tabiteuea Village, which would be my home for the next two months.
I lived in a thatched, open air hut on stilts, with no walls. I couldn’t find a way to tell my parents I had arrived for over a week and a half. I was living without a phone, reliable internet, or a clock, and was taking showers with a bucket. I was stripped of all of what I was used to as “comforts” in my former suburban life, yet I had never felt more connected to the people around me or more in tune with nature.
I was completely out of my element, without a working knowledge of the Kiribati language, and without any clue how to behave in the village. I was forced to surrender much more than my material comforts—I surrendered my independence, my personal space, and my sense of individuality. I became completely dependent on my host family, who taught me how to survive in the village and welcomed me like their own daughter. Initially, I was terrified to let go and rely on others, but I gradually saw the value in becoming a part of a community and a family, even if they were complete strangers. 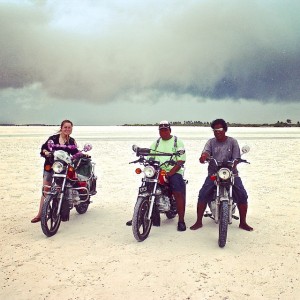 Becoming completely dependent on strangers forced me to trust and be open to others in ways I was formerly afraid of. The benefits of facing this fear and letting it go outweighed any initial discomfort or loneliness I felt at first. Traveling alone forces you to become self-reliant, but in a way that is actually surrendering yourself and putting your life in the hands of the community around you.
Each time I have traveled alone, I have been embraced with more love than I could have imagined. I have been welcomed like a daughter by those I’d just met, and treated like an old friend when I had only expected indifference. In addition, stepping out of my daily routine and into a new culture always forces me to live in the present moment, because my mind is initially focused on survival, but through this presence, I become more aware of the kindness of others, even if it is just a smile.
Shifting from a hyper-productive, individualistic culture in the States to a primarily subsistence-based lifestyle in a village made me realize the value in cooperation and community. Through living in villages located right at sea level, I also became extremely aware of the implications of large scale issues like climate change and the realities for those living in affected areas, who have few resources to combat the destruction. There are real, day-to-day implications in the developing world, and especially in the lives of those living in Pacific island villages. It’s easy for us to drive our car to work, spend hours on our computers, and have every room in our house lit up, but we forget that each one of those decisions has real-life consequences for those on the other side of the world. With every foot the sea rises, the Kiribati people face threats to their gardens, which they rely on for subsistence, and their shallow fresh water supply, which is increasingly becoming contaminated with salt water.
Today, I am back in Fiji, and next week I will be returning to Kiribati for the next nine months to continue sharing the stories of the Kiribati people. I hope that by sharing these stories, people will become more aware of the culture and identity of the Kiribati people, but also hear the realities of life on an island where climate change is not a far-off existential threat, but one that is having a huge impact on the culture and survival of the islanders today. I hope that this work will increase the connection between the Pacific and the rest of the world and hopefully spark discussions and action. Wherever I go, I always try to remember to smile, have an open mind, and trust strangers.

Foreign Travel Foreigners Nomadic Mindset Travel
About
Janice Cantieri
Janice Cantieri is a journalist and researcher from Milwaukee, Wisconsin. She believes that travel has the potential to connect people, increase mutual understanding and respect between cultures, and spread love !!
Recent Posts
Popular Posts
Follow Us on
Copyright All Rights Reserved © 2015