Crafting My Cave of Wonders By Nicole Edry

What does it mean to walk the path of your ancestors? Is it some mystical smoke ceremony approved by Hollywood with the proper amount of barely clad beautiful people? Does it mean you go to the school, work the job, marry the spouse deemed to make your forefathers proud?

Or does it all boil down to that brief, powerful, loaded word: legacy.

Growing up, skimming in and out of the U.S., Israel, the Caribbean… I got glimpses. Tastes, snapshots, moments snatched from time recollecting lives unspooling in entirely different ways. It’s one of the reasons I’ve always loved traveling so much: you get to view our chaotic quilt of humanity in all it’s multi-colored glory.

Traveling every summer with my dad in Israel for about 7-8 years shaped so much of who I am today. I get my taste in driving aimlessly, listening to good music, stargazing with nothing more than a blanket/good company, and appreciating ancient ways & customs from that time. (Not to mention my obsession with Coke and sunflower seeds).

Fascinated with the million climates populating one small land, I bounced from beach to mountain to cave to desert and back again. 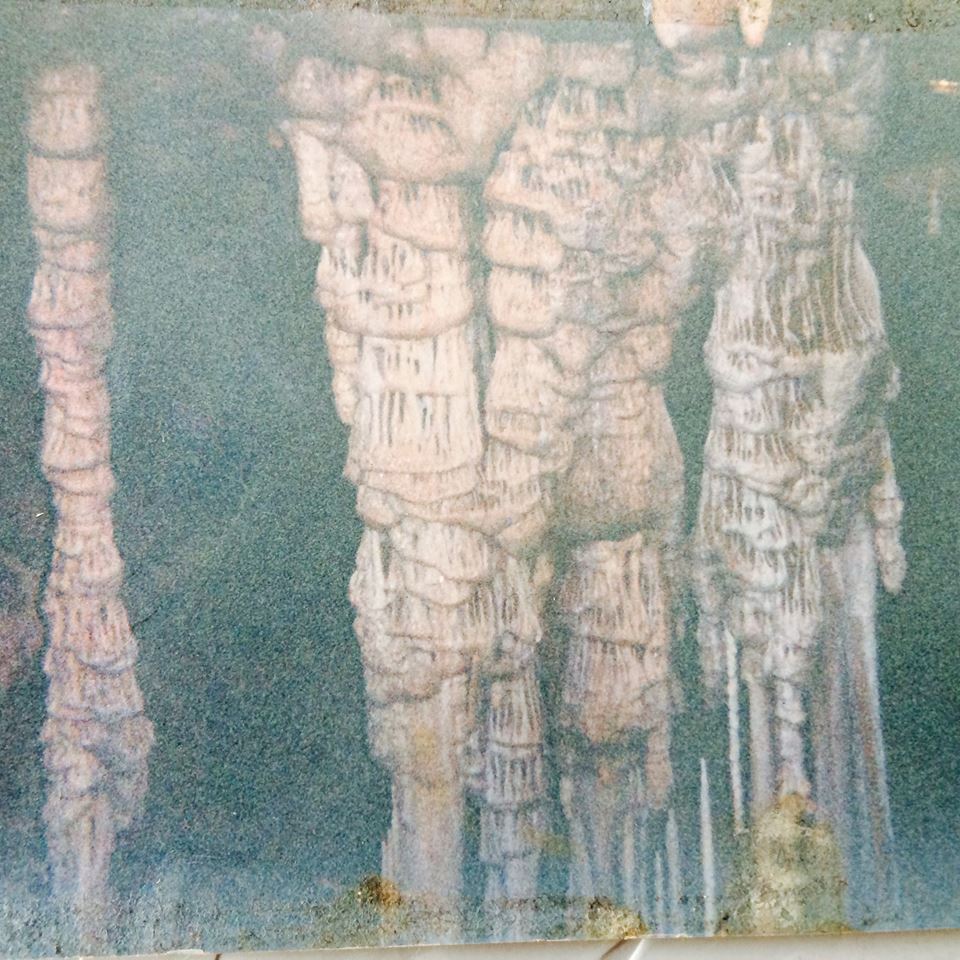 And I fell in love with the art of the journey.

Because of vibrant, buzzing open air markets with vendors of all colors, shapes and sizes. Of hot summer nights chatting with new friends and strangers, ignoring language barriers in the heart of Jerusalem. Of seamed smiles and welcoming hands from the Bedouins offering me flatbread in the outskirts of nowhere.

I think my future as a nomad was born there, between hills and heritage sites and hamams.

Still, despite the fact I spent some time in my parent’s respective homelands, a lot of my extended family is shrouded in mystery. Probably because it is so ethnically diverse, some are no longer with us and other logical, practical reasons.

Accordingly, I only recently learned where the Greek and Brazilian in my background came from (my dad’s grandparents) and that I’m apparently descended from King David (my dad’s mom’s family, the Luria).

Before those new plot twists, my heritage was bare bones and blank slates.

I’d met second and third cousins, heard snippets of family lore and tried to weave the pieces together. Although I’m still far from seeing the whole picture, those fragments were enough to tantalize me.

It’s why, despite having taken no Spanish in college prior and deciding to go to London at age 17, I ended up studying abroad in Granada, Spain my junior year of college. 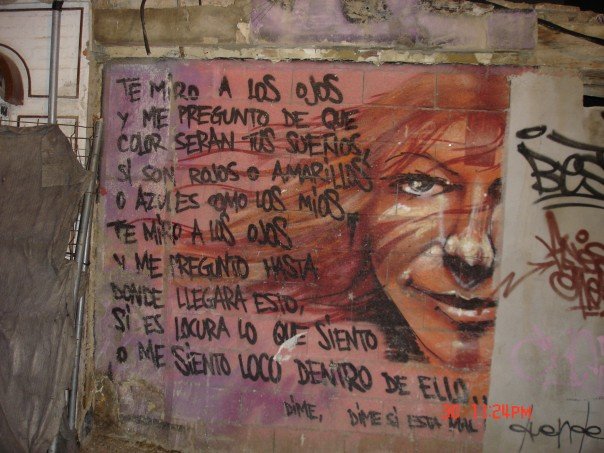 Interesting thing about Granada: it’s the best kept secret of Spain. As the last city to be reconquered by Isabel and Ferdinand, they’ve retained the strongest Moorish influence. The Alhambra looms over the city like an unshakeable memory, breathtaking and haunting.

Corkscrew, narrow streets skip between bars offering free tapas, the lack of a metro and colorful local characters builds a truly unique community, and the blazoning graffiti sprawling against whitewashed walls is more art than defamation.

I fell in love with that city, and it saved me from myself. I thrived more traveling, alone, thrust into an unfamiliar environment where I knew nobody and only moderately understood the language, than I ever had back home in CT.

There’s a reason new frontiers have always fascinated us.

Rather impulsively, I decided to go to Morocco. Some girls in my program had already planned a trip, and although I was on a strict budget and we weren’t super close, when they invited me to join a week before leaving, something compelled me to go along.

That ended up as…quite the adventure.

Despite the numerous headaches associated with that particular sojourn (which had more to do with where I was at personally than physically), there was a single moment that I will forever hold close.

The girls and I had hired Berber guides to take us out, by camel, to camp overnight in the Sahara. We were somewhere outside Merzouga, and had left civilization behind hours ago as our camels snorted and harrumphed their way through stunning dunes.

After our tents had been erected and delicious tajine consumed, we all gathered around a bonfire. Next to a gorgeous oasis, relaxing with our guides as they played drums and alternated singing Marley and Morrison with traditional songs, it felt a bit surreal.

We indulged in our fair share of idiotic behavior, rolling around in the sand and sliding down smaller dunes until our guides interrupted laughing, surprised none of us had gotten stung by snakes, scorpions, broken glass, or the other dangers lurking just under the surface.

That was enough to put a damper on our romping, but it wasn’t enough to quench our thirst. 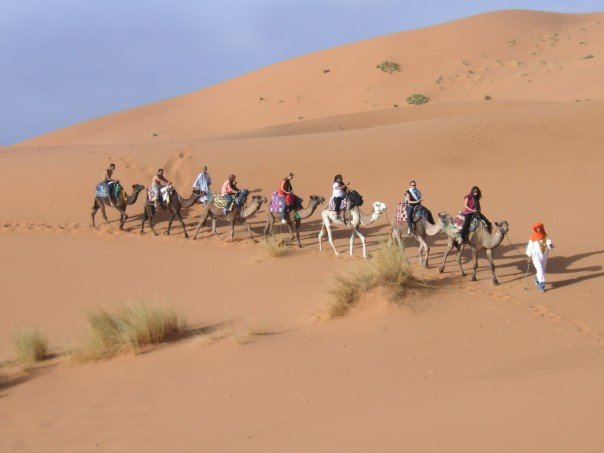 So, we decided to climb the biggest sand dune. When we actually made it to the top, I’m not sure who was more surprised– us, or our guides! I ended up a bit away from the other girls who were chatting and mingling, my lust for the stars growing by the minute.

I had never seen such a sky. Stars blazed for miles, lights danced overhead. I could see rain in one, far off corner and heat lightning in another. When I closed my eyes, the wind whipped my hair around in a dance as old as the sands rollicking under my bare feet.

The universe swallowed me up. I became totally insignificant and quite okay with being so. I’m not sure how long I sat there, immobile, until I had my revelation.

Back in Spain a couple weeks before this trip, my father had told me something interesting. So very long ago, my ancestors were Jews living in Spain. More specifically, Granada, Spain.

During the Inquisition they were forced to leave, to flee to Morocco to survive. That’s where they settled for awhile, where my grandparents were born, before they moved to Israel.

Because of my sunburned summers as a kid outside Jerusalem (where my Aba was born), then my year abroad in my soulmate of a city, Granada, and now my journey into the heart of Morocco, where my father’s family had settled…I had come full circle. I had retraced the path of my forefathers. 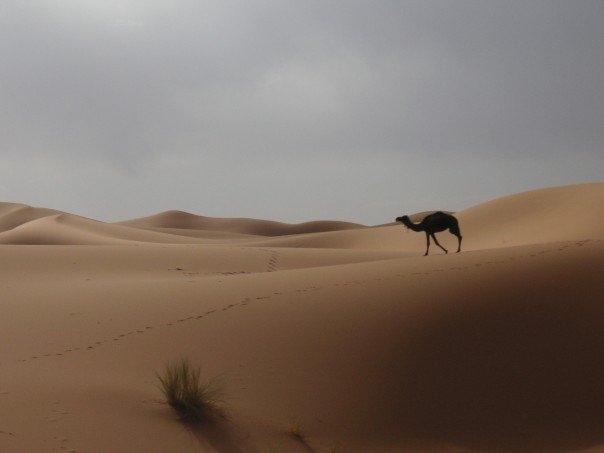 To date, this was one of the highlights of my life. I felt awed, humbled, not a little mystified. So much blood, sweat, tears, hopes, despairs and triumphs had carved out a path for centuries before me.

Now, in under a decade, I was able to unwittingly honor their legacy by sharing my soul with each points of that path. On a map it may look like just a lopsided triangle but really, it was a million degrees of me.

I could feel history in my fingertips, taste tradition in the cold star-soaked air. I think it was the first moment I truly accepted and appreciated my heritage. My legacy.

To those who say there is no wonder left in the world, I only have one word for you: travel.

Nomadic Mindset Travel Wonders
About
Nicole Edry
Nicole is currently a Creative Project Manager at a globally integrated media company in New York City. She has learned from a medley of professional fields, such as consulting, marketing, branding and events. Her unconventional career path includes freelance writing, production for an award-winning adventure/travel and culture show on ABC and learning the value of diplomacy in Yale’s PR office. She’s gone from growing up summers as a teenager in Israel to puttering around her abuelo’s farm in the Dominican Republic, wandering across Europe during junior year of college to most recently teaching ESL in rural China in 2011. With a bachelor’s degree in World Politics from Hamilton College and roots in activism & nonprofits, her true passion is building bridges between peoples, places and cultures.
Recent Posts
Popular Posts
Follow Us on
Copyright All Rights Reserved © 2015